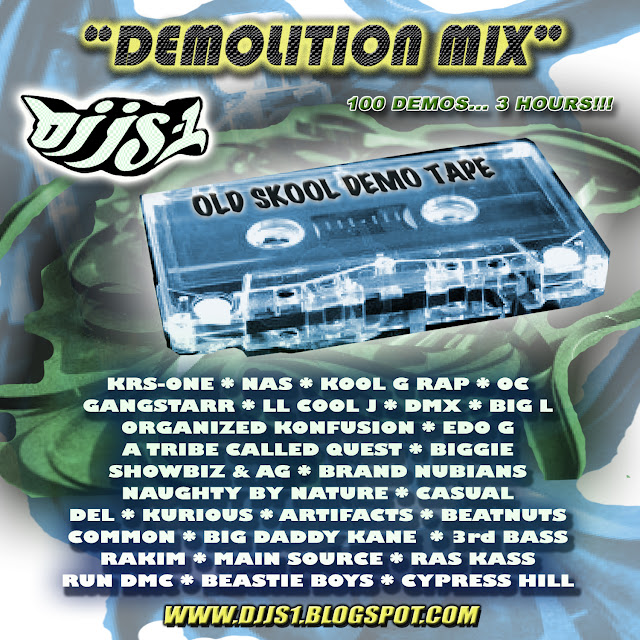 It's finally here... The 3 hour long "DEMOlition Mix" is complete. For the past year or two i collected a bunch of demos from many of our favorite hip hop artists. I have a collection of approximately 350 to 400 demos and rare tracks. I narrowed that down to my favorite 100 and made this mix. There is a few things to keep in mind about this new mix. First, these are all demos, many of them from cassette tapes, poorly recorded, duplicated n copied over the years, played on radio shows, etc, so the sound quality is not top notch. The sound is the best it could be considering what this is. i had to leave out several of the famous Wu Tang demos and some Mobb Deep demos because of the extremely poor quality. Second, when i say demo, i mean that lightly. Many of these are actual "demos" in the traditional sense of the first recordings they made to shop for record deals. Others are unreleased songs, some that are not completed, some are songs that have been released but this is the original version or unreleased remix. Some are just very rare unreleased songs that i wouldn't necessarily classify as a "demo". And finally, these are my favorites. Like i said, i have 400, so i picked the ones i personally like to listen to the most. Please do not contact me to tell me which rare demo you know of that i missed or didn't play unless you are emailing me the file and thanking me for making such an unmatched plethra of mixtapes. Also,  I'm sure there is demos and freestyles from wocka flocka, drake's uni-brow, mac miller's cousin and asap rocky's partner asap bullwinkle, but i used songs from only the greatest like krs-one, biggie, rakim, kool g rap, big daddy kane, nas, run dmc, tribe, del, organized konfusion, lord finesse, etc...  For most people this is getting 3 hours and almost 100 songs by your favorite classic hip hop groups that are brand new, but made in the golden era years. It's really a nice treat and it will take you a while to listen all the way through.
I doubt there is anyone who heard EVERY single track in this mix. Even the biggest hip hop fiend and collector is sure to find something on here to make them look twice. This whole mix is worth it just for the unreleased KRS-ONE and DJ PREMIER track that didn't make the Return of the Boom Bap album.
Thank You Dj Premier for letting me have that. I promise we won't sell a few thousand white label 12"'s to japan. hahaha. The 3rd Bass and Brand New Heavies track is also a really good one to check out. Of course all the Rakim songs on here are sure to make you press rewind once or twice. I think the DMX track like Unstoppable Force will surprise people. I love the Biggie reference track for Lil Kim. That's been around for the longest, but it's classic and i die laughing everytime he says stuff like "i suck dick better than you." lmao. man, mr. cee must have been loving this track. I wish i had the reference tracks Treach did for Queen Latifah or all the ones everyone did for Dr. Dre. anyways... The first song, with RUN DMC doing the original to the Beastie Boys Slow N Low is really bugged out too. I'd like to know the story behind how soo many different songs were made. For those who never heard the Scenario Freestyle version or the Rampage freestyle with LL Cool J's second verse, then you are in for a big treat! There is also no other mix available that is 3 hours long, with this amount of rare material, and cut up and blended the way i do it. The track-listing should speak for itself. This is certainly a mix for your all-time collection. It is long (3 hours), so the file size is fairly large (270mb), but well worth the download.
Obviously you can see the amount of time and energy i put into making these special mixes for everyone. I do ask in return that you really help me get these mixes out there on the internet for people to hear. please tell your friends on facebook and twitter. let them know! retweet and post, please. If you work on any official hiphop site, this mix should be posted there. Soo many people have no clue there is still a few djays like myself left that is posting mixes like this. Let's be serious, most mixtpe djays nowadays are charging up-n-coming kids to put their demo on some bullshit mixtape. That's as corny as rappers who think they made mixtapes... But not as bad as rappers n singers who think they dj.
Pull out ya money, pull out ya cut, pull up a chair...
I hope you enjoy this and appreciate the history and super-special rare treats hidden in this mix. Since i have soo many left, this will probably be a volume 1, with volume 2 coming next year. For now, I'd like to thank a bunch of my fellow dj friends, collectors, others who inspire me to do mixes likes this, and those who help me find some of these treats. Thank You....  i don't forget any of you and remember all you do for me. Just you remember that every time you see a fake dj, someone posing as a dj, disrespecting djaying, pleeeease, slap the shit out them. No matter how "hip hop" you think you are and how cool and knowledgeable you perceive yourself to be, there is ALWAYS more to learn and more treats to find. The 80's and 90's for hip hop were not just the same 100 songs every idiot dj has in their serato. There is thousands of songs, so dig, dig, dig, and dig some more...

DO NOT FORGET, YOU CAN GET DOZENS OF MIXES by DJ JS-1 at WWW.DJJS1.BLOGSPOT.COM 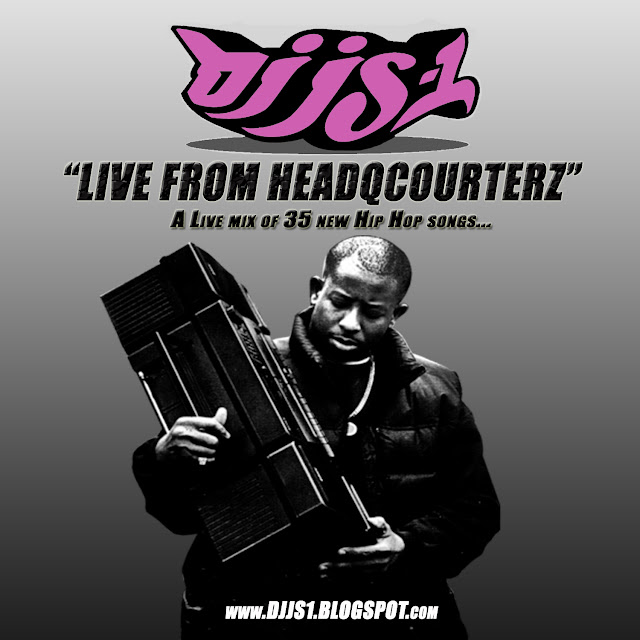 As many of you already know, sometimes i fill in for Dj Eclipse and Dj Premier on their Sirius/XM satellite shows. This past week, Dj Premier was in Canada with Bumpy Knuckles and asked me to man the turntables while he was gone. I just recently did Eclipse's show, so this mix might have some of the same songs from my last two previous mixes, but there is also some new tracks as well. There is my 3 favorite new songs off the Masta Ace and MF Doom new project, two new tracks off Large Professor's new album, an exclusive Public Enemy and Bumpy Knuckles song and a few other treats... I edited out all the talking parts from the radio show, so it is just the music for 90 minutes!
For those of you who have asked me when i am doing a new mix, or frequently check for my mixes, i am happy to tell you that i am currently working on a few different concept mixes that will not disappoint. If you appreciate what i do, help me spread the word by retweeting and reposting these links. Also make sure you subscribe to this blog so you get all the new mixes emailed directly to you. By the way, Kanye wears women's clothing, in case you didn't already know that....