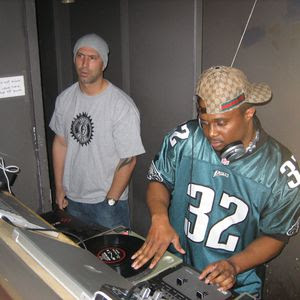 Dope episode with Big Noyd, Ty Nitty and Big Twins from Infamous Mobb as well as the Jigmastas and Skam2?. First mic break at 9:43 with Noyd. Funny, one of the announcements was for the Fat Beats Big Noyd in-store at the OG location which was supposed to happen in two days, but never did cause Noyd ended up on the lam. Noyd, Nitty and Twin freestyle at 16:03. After that, Riz on the wheels with joints until 53:39 where Kriminal and SKAM2? (aka Skam The Inhumane) freestyle. At some point during the freestyle session DJ Spinna hops on the decks. Then right after the freestyle session there's a dope set of originals (64:23) which I'm still trying to figure out who spun. I pause taped it so there's no mention of who it was, but the general consensus after asking a couple people is that it may have been DJ Muro. Oh, and excuse the excessive static near the end of the show. Must have been a rainy night.  Thanks to DJ Eclipse for the tape rip!!